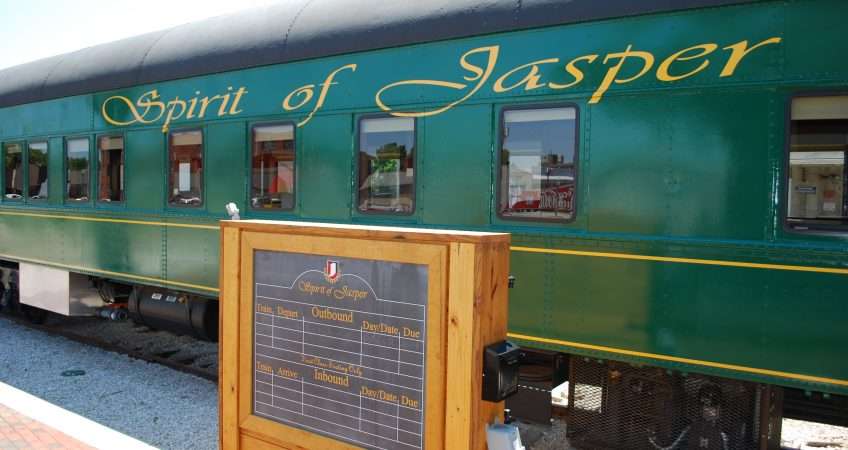 Posted by domains In

All aboard the Spirit of Jasper for a scenic excursion from the Jasper Train Depot. Ride in style on three beautifully renovated, climate-controlled lounge cars complete with restrooms, comfortable seating, and a cash bar.

Whether your pleasure is to enjoy the Express from Jasper to Dine & Ride, or to enjoy the fire of the autumn leaves on a Fall Foliage Ride & Dine, your experience will be unforgettable.

Additional special rides are available on select dates and times throughout the year.

Reservations are suggested for all train excursions and may be made by calling the Jasper Park & Recreation Department at (812) 482-5959 Monday through Friday from 8:00 a.m. – 4:00 p.m. or by visiting www.spiritofjasper.com.

When the Redevelop Old Jasper Action Coalition (ROJAC) was first formed in 2003, one of its first goals was to bring a tourist train to Jasper. It was the vision of ROJAC to increase tourism to Jasper, especially to the Old Jasper area. The Spirit of Jasper is the most prolific of the additions to Old Jasper, which include the Riverwalk, Jasper City Mill, and Schaeffer Barn.

The first thing for this project — a train depot had to be built, which was completed in August 2004. The train cars were obtained in 2006 from Crane Division, Naval Surface Warfare Center at a cost of approximately $8,000. The engine was previously used at Crane as well to tour guests around the complex; however, this stopped after the attack on the World Trade Center due to security issues. The train tracks had to be renovated to be safe for passenger travel, for which a partial grant was obtained. Local businesses and volunteers showcased their talents by donating materials and labor, renovating the cars, an expensive and elaborate process.

The locomotive that is owned by the City of Jasper is a 1956 General Electric 80-ton diesel-electric powered switch engine. However, another locomotive owned by the Dubois County Railroad, a subsidiary of the Indiana Railway Museum, is the primary locomotive for the train excursions. This engine was built between 1940 and 1950 and is an ALCO S2, a 1,000 horsepower switcher diesel locomotive.

Club Car #200 was originally built for the Milwaukee Railroad in the 1940s and used as an overnight coach car. It was rebuilt as a passenger car with a club-seating configuration by local businesses and individuals in 2009. The car has a seating capacity of 46 passengers.

Lounge Car #300 was built between 1917 and 1922 and was originally equipped with shelving and used to transport deceased World War I soldiers back to their home towns. It was renovated by local businesses and individuals in a dining car seating configuration in 2007. The lounge car has a seating capacity of 48 passengers.

The specific age of Parlour Car #400 is unknown but is believed to have been built in the late 1940s. Its original use was as a military hospital car. It was rebuilt by local businesses and individuals in 2008 and set up in a modern contemporary seating configuration with leather couches and LCD flat-screen televisions with a 19-foot long bar. The Parlour car has a seating capacity of 32 passengers. 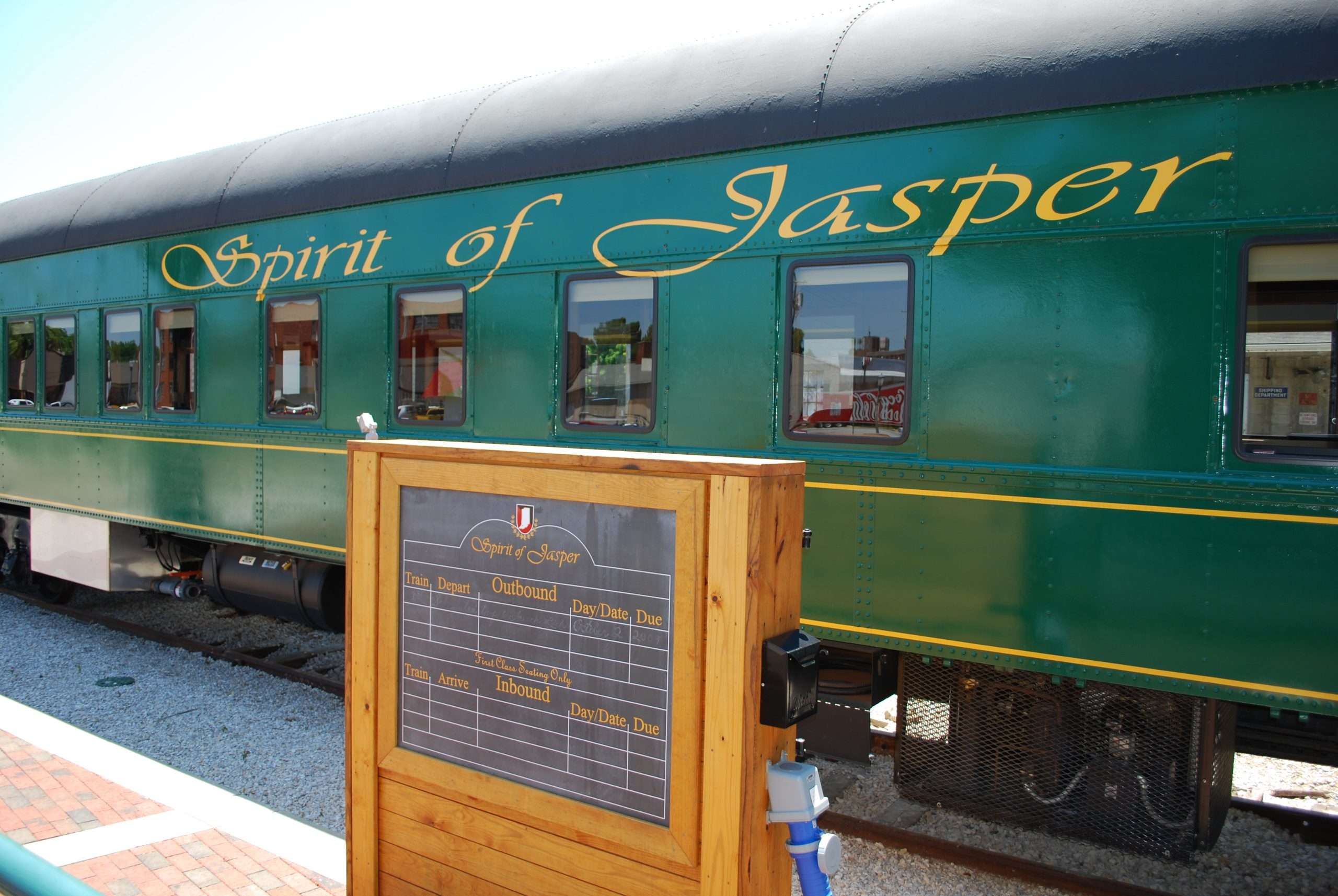 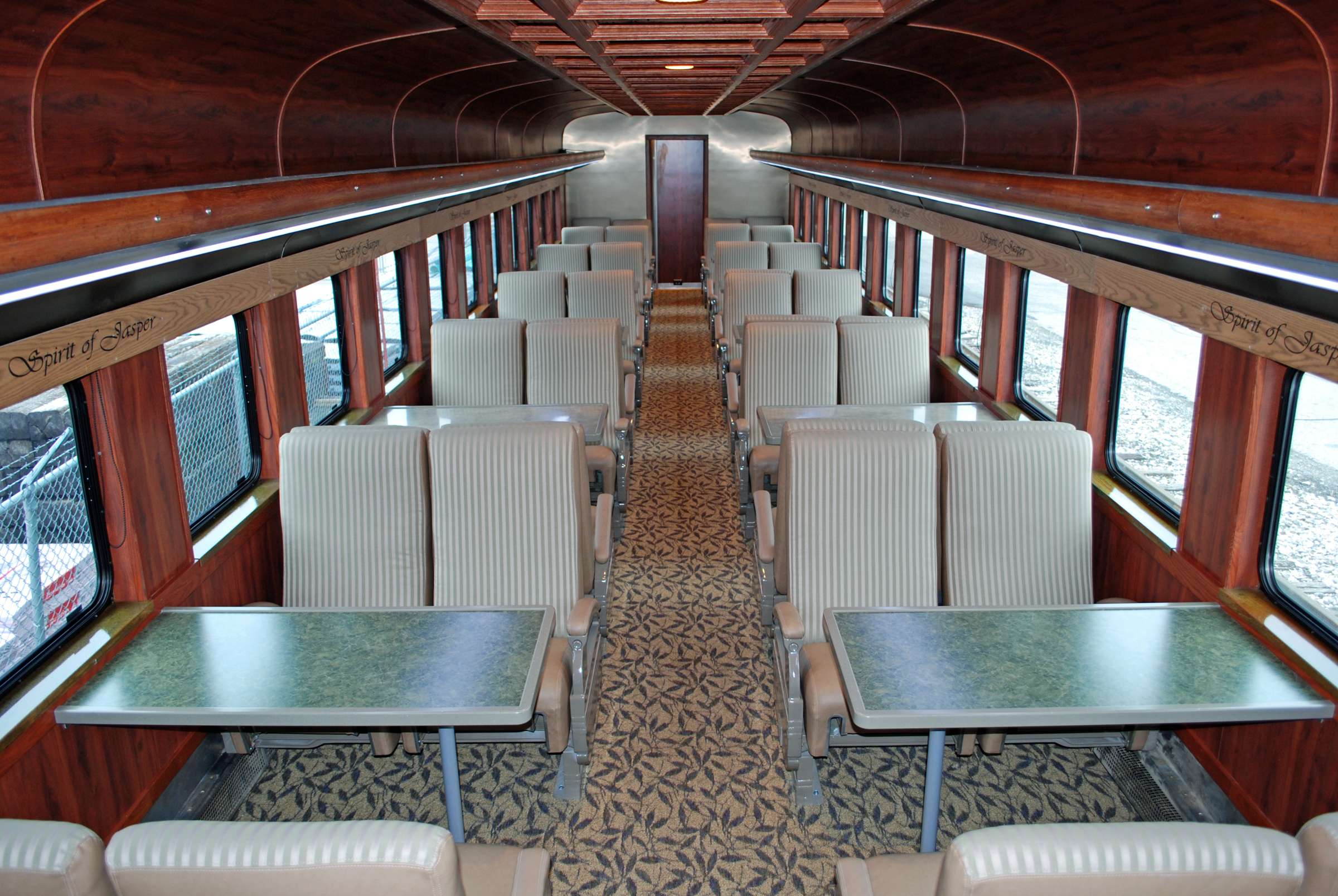 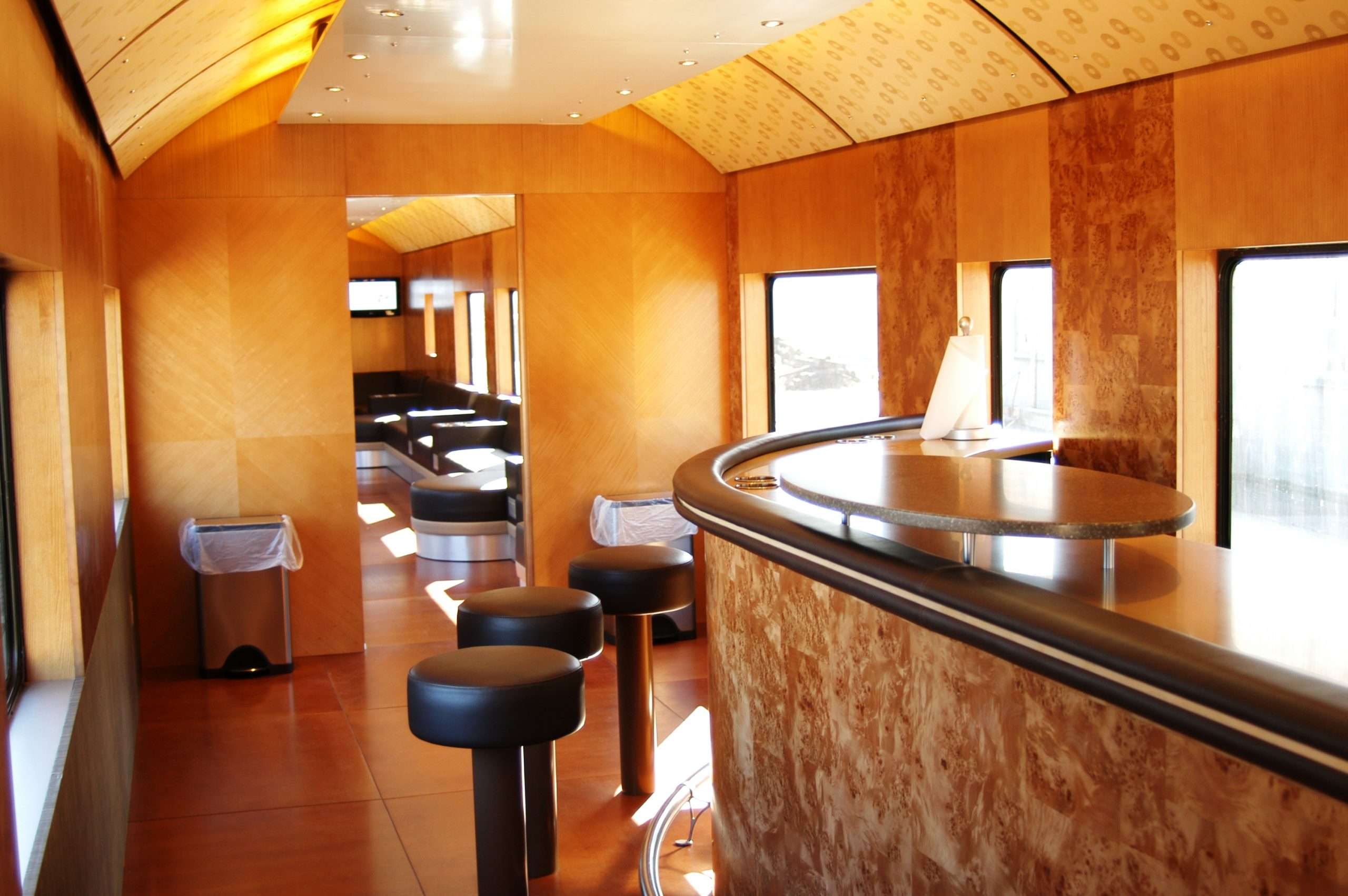 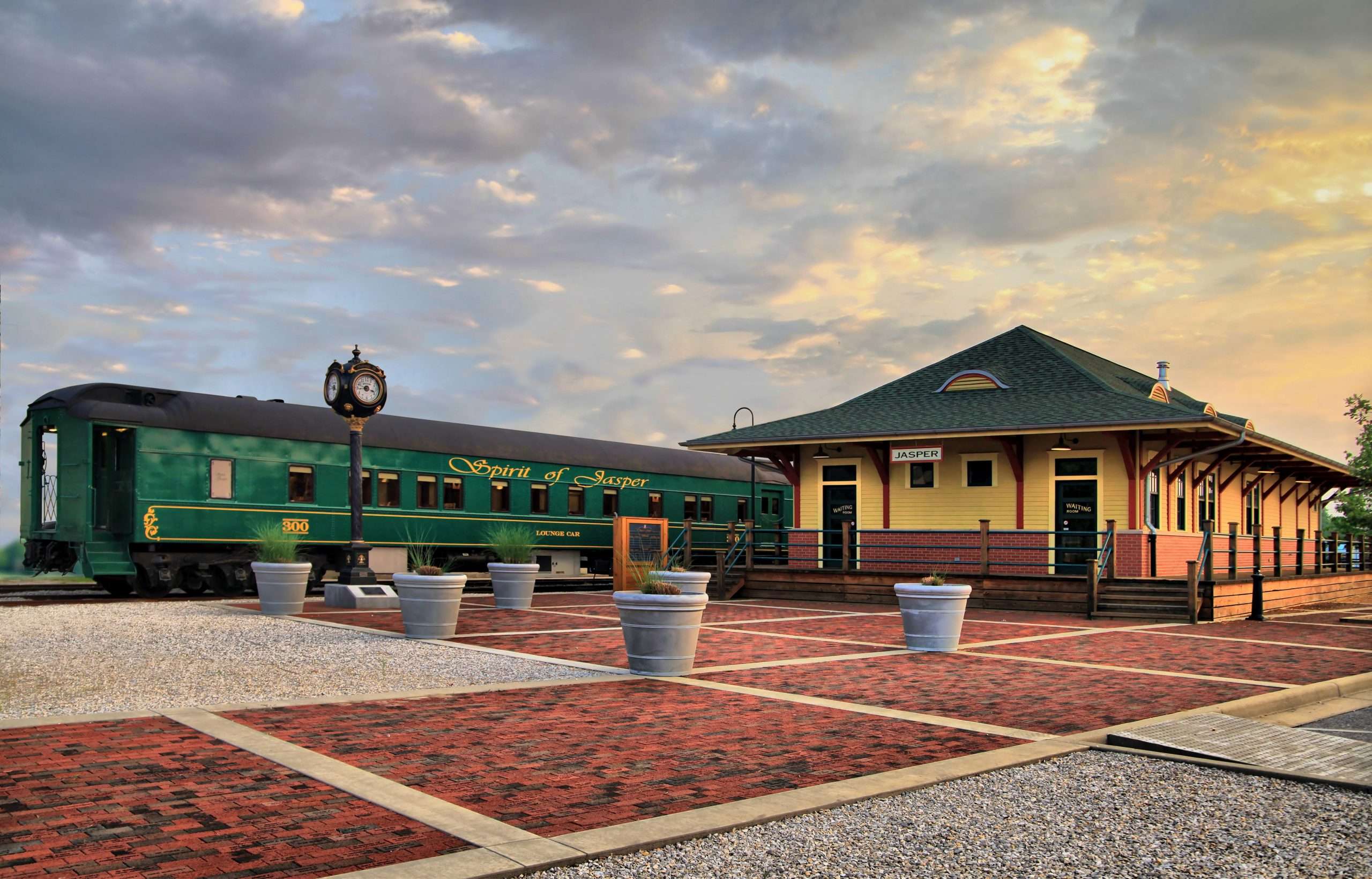 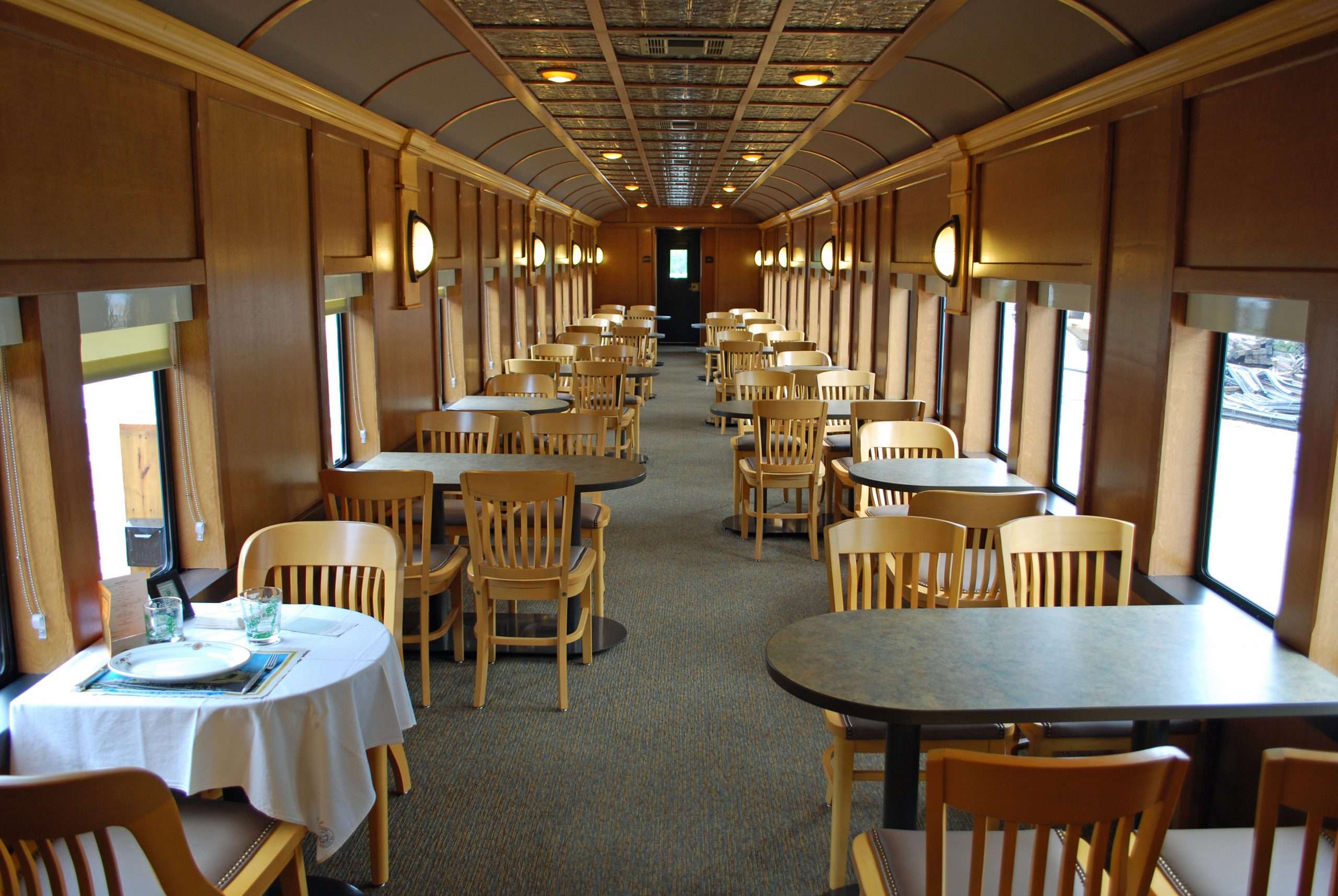 Sign up below to recieve our eNewsletter and stay up to date on the latest events and happenings in Dubois County!
Copyright 2018 . All right reserved.
Go to top
Navigation
X