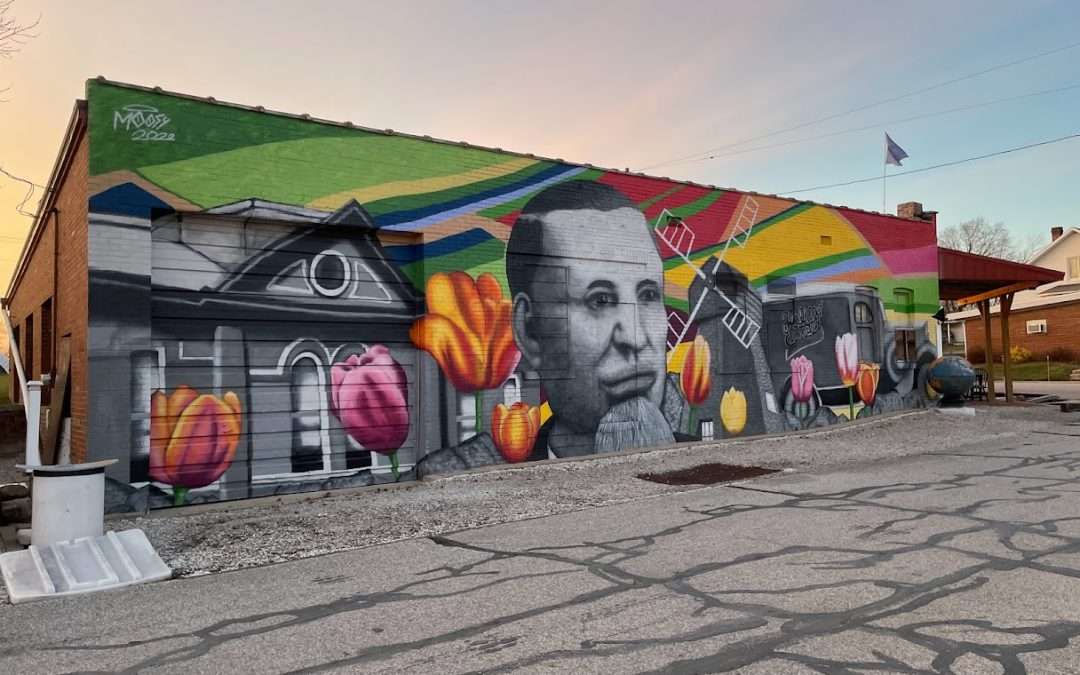 “When I see three oranges, I juggle,” said Philippe Petit; “when I see two towers, I walk!” Like the man who crossed through the air above lower Manhattan in 1974, Trenton Musch sees potential in negative space. Conversing in a gallery, he can’t help but call attention to a large expanse of bare wall. “Look at that!” says the artist who tags his murals as “Moosy,” “it could be so much more exciting!”

He’s not a circus performer, but the 21-year-old Comprehensive Design major has already pulled off an astonishing number of artistic feats in the public sphere. From his northern Indiana hometown of Rensselaer, where the Eskenazi School student first learned his craft, to his latest creation in the southern Indiana town of Holland, Indiana, “Moosy” has signed his name to at least 40 murals.

Musch undertook his most recent mural as a fourth-year design capstone project for W400/W450 with Jon Racek, Comp Design program director and senior lecturer. Executed over a week in late November, the Holland mural project originated in collaboration with the IU Center for Rural Engagement. It is one of numerous quality-of-place projects undertaken since 2018 in partnership with Dubois County as part of the center’s Sustaining Hoosier Communities initiative. The partnership seeks “to improve and enrich the health, prosperity, and vitality of our region,” according to the center’s website, “… nurture a diversity of individuals and perspectives, [and] foster a strong social fabric and culture of equitable civic engagement.”

Building on a strong sense of place

In Holland, Musch and Racek encountered a community with a strong sense of history and civic pride, with a desire to revitalize the downtown. With CRE as a liaison, they met with stakeholders in the town of under 700 residents to identify how public art could amplify Holland’s already considerable sense of place. In a series of conversations, the Eskenazi team worked with town representatives to determine a suitable location for the project as well as themes and source material for the mural’s imagery.

Together, they chose a site across the street from the town’s central commons, which had become increasingly active as a gathering space since a pavilion had been installed there for the state’s bicentennial in 2016. The task at hand was to expand that activated space. Musch’s placemaking strategy included creating a historical mural on the side of a vacant building with a sightline to the pavilion, installing seating, and painting the pavement between the mural site and the commons.

With guidance from public school teacher Lee Bilderback and town councilwoman Melanie Barrett, and a pair of local history books for reference, Musch got to know Holland’s history since its settlement by German immigrants in the 1830s (who came to call the area “Holland” in homage to the Dutch peat bogs they’d worked to earn their passage to the US, according to lore). Musch proposed a sequence of compositions alternately incorporating portraits of the town’s earliest residents along with agricultural, commercial, and architectural motifs.

Ultimately, Musch and the town stakeholders landed on a composition contrasting iconic historical elements in monochrome with tulips and tulip fields in vivid color, “represent[ing] … how much beauty and impact individuals have in small communities,” Musch explained. The mural also references the town’s prominent dairy industry (suggested by the Holland Custards delivery truck), its first school, its windmill, and its founder Henry Kunz. 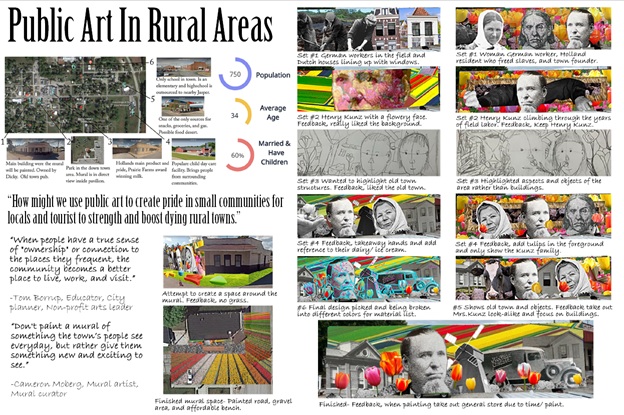 A witness to the power of public art

Although Musch was a newcomer to Holland, his own experience growing up in small-town Indiana gave him an innate connection to the place, and a motivation to contribute. “Personally, growing up in a small town I found it hard to find pride and wonder for my community,” Musch reflected. “I just couldn’t wait to grow up and leave my town.”

That started to change in 2014, when his father, a Rensselaer business owner, headed up a revitalization project that ultimately resulted in the installation of more than 20 multi-story murals across the city. “It was everyday art created for the people to enjoy and it allowed me to slowly build pride for where I live,” Musch recalled. After watching the muralists at work for a couple of years as a teenager, Musch sought out a mentor in San Francisco-based artist Camer1 (Cameron Moberg), who taught him the craft. “I wanted to create the same joy,” Musch said.

At IU, he decided to pursue a Comp Design major at the Eskenazi School to acquire the technical resources to “create strong mockups to show clients. Painting is only half the challenge of creating a mural,” Musch explained; “designing the mural can arguably be the more important half.”

Having immersed himself in Holland’s history during the project’s research and design process, the process of physically installing the mural only deepened Musch’s connection to the town. Taking advantage of unseasonably warm weather over Thanksgiving week, Musch spent his days on a ladder with an airbrush, translating his design to the brick wall. After-hours, the painter — who was working on his own — would head to the American Legion Hall for company. Inasmuch as Musch embraced the community, Racek said, they embraced him back. “They told me he was ‘one of them and we don’t say that often,’” said Racek.  The mural was unveiled at a gathering on the evening of December 3.

“The Town of Holland is benefiting greatly from its experience with the Center for Rural Engagement,” said Bilderback. “A rural town of 700 people, Holland would be challenged to find the sources and funds for such projects as the Kunz Mural and downtown renewal planning. The program’s staff and students have been eager to assist our community add art and urban enrichment to its offerings as a destination for visitors and even a prospective home for relocating families.”

Over the last few years, “Moosy” has also enlivened the Bloomington landscape with murals on the interior and exterior of The Warehouse along the B-Line Trail in Switchyard Park (as featured in this profile). A mural featuring Leonardo da Vinci that the Eskenazi School student created during a six-hour challenge last summer is being donated to the Monroe County Public Library, to be installed in its new southwest branch when it opens in 2023.

In the meantime, Musch is traveling to Taiwan to complete a mural commission. Like the Twin Towers funambulist, the artist hears big buildings call out to him. “Before I reach 25 in four years, my goal is to paint a 10-story (or bigger) mural,” he shared. “Saying this, it seems ridiculous, but as an artist being in a mindset where everything is possible can be strongly beneficial … Every time you create something new you learn a new perspective and become less scared to fail next time.” 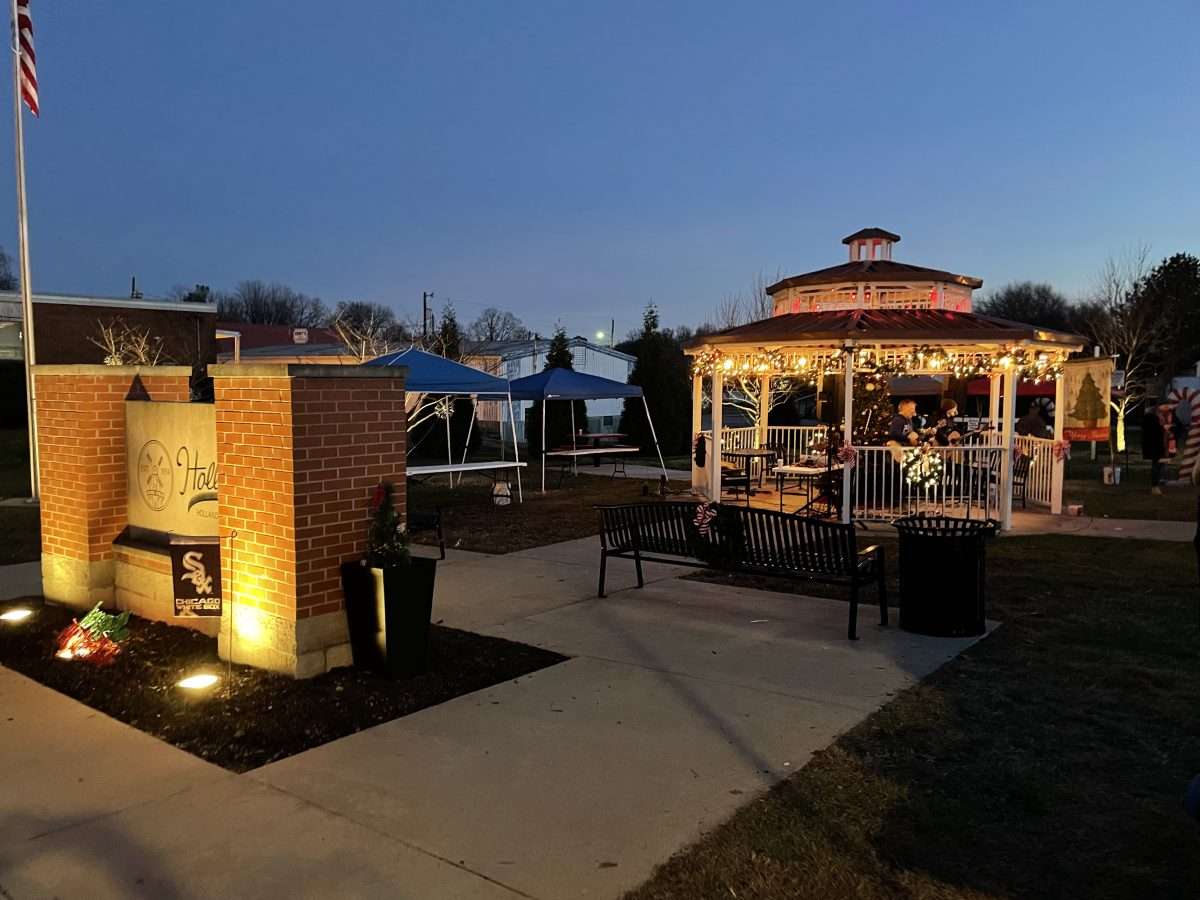